Wine with strong character – made under the Małopolska sun

Wine with strong character – made under the Małopolska sun

You do not necessarily have to go to France or Italy to drink a glass of pinot grigio, chardonnay or merlot – what is more, you can drink them with a view of the Tatra Mountains, of Gorce and the surrounding fields and meadows. The vineyards of Małopolska are places where nature blends with culture – and not just the wine-drinking culture, and where the wine tastes like the salt of the earth on which it grows, the minerals and the Polish orchard. Its character is closely linked to the region – it is powerful, and sets them apart from the rest. This is the way to taste it – and it is truly a delicious taste, with hints of fruit and flowers.

The winemaking traditions, developed in medieval monasteries located in Małopolska, were long-forgotten, as they became extinct with climate change, trade collapse, wars and overly aggressive competition. This is a pity, because even the ancient Romans imported wine from here, barrels with this noble beverage travelled along merchant routes, vines were grown on the slopes of Wawel, and wine from its fruit found its way to royal tables. At times, it was tart and very dry.

The custom of cultivation was forgotten, but nature could not be fooled. Near the wall of the Camaldolese buildings, there are century-old vines, planted long ago by the monks. And they bear fruit to this day. The owners of Srebrna Góra vineyard, who resurrected these traditions, believe that along with the vineyards, the custom – maybe even a fashion trend – of drinking Polish wines will return. They are not the only ones. Winemaking in Małopolska is getting back up to speed at an extraordinary pace. Today, the region is home to over a hundred vineyards, 50 of which make up the Małopolska Wine Trail, with tourists enjoying themed events and festivals, which allow them not only to get acquainted with the taste of the beverages that are made under the Małopolska sky, but also with the attractions and charms of the place and region.

A heart in a bottle

It was the beginning of the 20th century when vineyards started opening in Małopolska – as an experiment. However, the first successes achieved by the growers from Małopolska and Podkarpacie served as encouragement for others, emboldening them to take action. It turned out that these difficult, demanding soils, cold springtimes and frequent cold spells can all result in a decent-quality wine. It requires patience worthy of a monk, a lot of ambition and willingness to search, but the end result invariably gives a lot of satisfaction. Different flavours are made in the north of the region, where loess soils make up the majority of the mix, while the Kraków-Częstochowa Upland or the Carpathian Foothills offer different tastes and hints. The bottles contain what the fruit draws from both the earth and what surrounds it. And the hearts of those who planted them. And these people are different. Some owners prefer to experiment with cross-breeding varieties, while others rely on the proven and classic ones. The regional canon in Małopolska features mostly white varieties – bianca, sibera, seyval blanc, hibernal, Odessa muscat and jutrzenka, with rondo and regent dominant among the red ones.

Sometimes success requires patience. Sometimes there is a two-year wait for wine, sometimes it takes even longer. The first wine from fruits collected on slopes located at the foot of the Camaldolese monastery in Bielany could be drunk in 2012, four years after obtaining permission for cultivation, and two years after the work has started. Its flavour and bouquet, or terroir (meaning land), are influenced by climate and soil, which can later be tasted in the glass. And the local soils are calcareous, typical for the Kraków-Częstochowa Upland – truly unique. Wines from noble and PIWI (hybrid) grape varieties are made in Srebrna Góra – both those that like a colder weather, as well as the riskier ones, that require a little more sun – riesling, chardonnay, pinot gris, gewürztraminer, pinot noir, zweigelt, regent, seyval blanc.

In some cases, the creation of a vineyard is decided by chance. This was the case with the Nowizny vineyard in Pogórze Rożnowskie. Instead of planting plums and producing suska sechlońska dried plum, Urszula and Bogusław Kamiński have invested in a modest vineyard. They made this decision because of the sunshine on the slope and the local soil. They hit a bullseye – they have excellent fruit, and the vineyard has grown to 90 acres, with different varieties of vines – aurora, bianca, hibernal, muscaris, muscat, seyval blanc, solaris and swenson red for white wines, as well as maréchal foch and regent for red wines.  The fruit is processed on site in a small processing plant.  White as well as red wines are fermented in special tanks made of stainless steel. The vineyard is located on the Małopolska Wine Trail. Visitors have a chance to taste their wines in a beautiful stone cellar and then take advantage of the attractions that are abundant in the area. It is not far from Lake Czchów, a rope park and fallow deer farm.

Local vineyards offer accommodations, home-cooked dinners and beautiful stories, and on top of that, they are located in great spots. From the castle in Korzkiew, it is only a couple of minutes’ walk to the vineyard of St. John. It is situated on the slope of Lipowiec Hill, growing on the clay-sandy soil on a bed of limestone of the Kraków-Częstochowa Upland. Their flavour has been appreciated by juries of wine competitions – the owners won numerous medals for wines of recent vintages. As part of the Małopolska Wine Trail, Open Vineyard Days are organised during which you can not only learn about the vine varieties and the history of vineyards, but also taste the best local wines. They never taste better than when served from the hands of the grower, who made them.

People who like active recreation – especially cyclists – can also do so here. If you go to Tarnów region, you can use the enoVelo routes. They will lead you to beautiful locations, famous for bean cultivation, pickled cucumbers and Tuchów sausages. It is also a region where you can taste wines made in
Dąbrówka vineyard, Rubinowa vineyard or Uroczysko. There’s one caveat – if you want to cycle home later… You might want to use the accommodation on site. 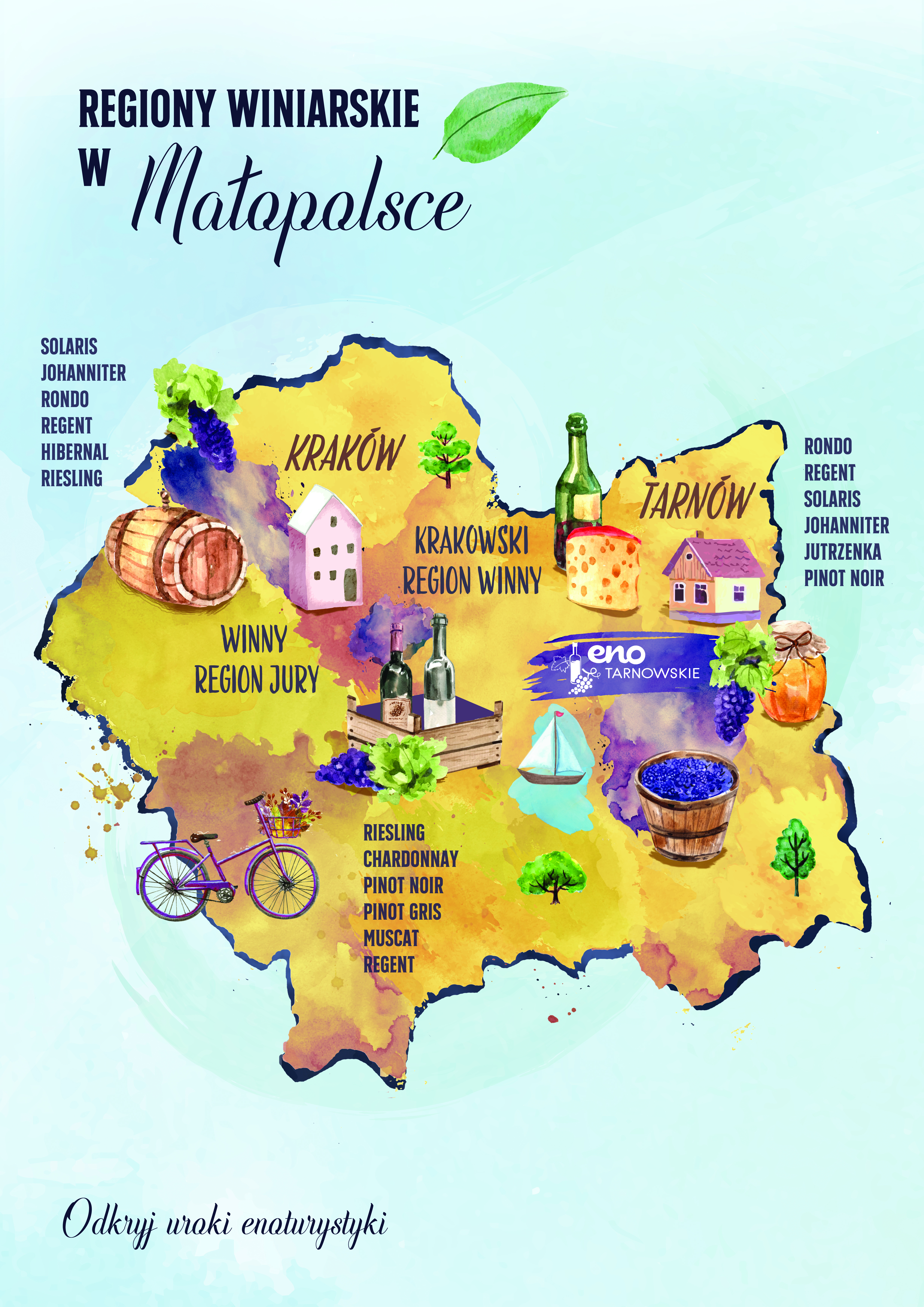